Welcome to the latest edition of Ashley Wheaton’s ‘Principal Thoughts’. This month, Ashley rounds up UCEM’s National Apprenticeship Week publicity and urges government to deliver on their promises.

This may seem an obvious statement to make but recently published statistics suggest there is still a stigma attached to apprenticeships and they are not fully understood or appreciated.

In a recent Mumsnet survey commissioned by the Secretary of State for Education, Gavin Williamson, three in five parents said they were concerned their child would be made to carry out menial tasks, such as making tea, in an apprenticeship.

In the same survey, which went to more than 1,000 parents, 45% of respondents were unaware that apprenticeships go up to degree level.

Another poll of 2,000 adults in England reported on in FE Week’s National Apprenticeship Week supplement saw half of those surveyed say they would be more likely to go to university when asked what they would consider as a route to develop their own workplace skills. In response to the same question, 30% said they would rather do an apprenticeship.

The false perception that apprenticeships are exclusively for young people and an alternative to gaining a degree-level qualification is too engrained in this country.

Even if this was the case, the same article (page 12 if you are interested) stated how research by YouGov and JTL revealed that only one in ten 15-18-year-olds are being encouraged to take up an apprenticeship by their schoolteachers. This statistic is staggering and highlights the struggle the apprenticeships agenda has to truly achieve its potential.

In light of this data, what better time for National Apprenticeship Week to sing the praises of apprenticeships! The awareness week spearheaded by government took place at the beginning of the month – inexplicably earlier than in recent years – to celebrate the success of the apprenticeships agenda.

We took the opportunity to inform people on our website and social media channels about our work in apprenticeships, the success we have had and also, some things which could be improved to make it all run smoother.

For the quickest way of digesting our work on apprenticeships, we created an infographic with the key statistics on our provision (see below). 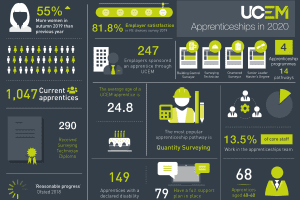 Apprenticeships infographic as at 3 February 2020

We peppered the individual statistics and nuggets of information from the infographic on our social media channels throughout the week. We also published content on our website which helped to tell our apprenticeships story day-by-day.

On Monday, we provided an introduction of our involvement with apprenticeships, publishing a video graphic detailing the four apprenticeship programmes and 14 pathways we provide. We also highlighted the fact that we received a ‘reasonable progress’ rating from Ofsted in our last inspection.

Our ‘Introducing…’ blog series shone a light on the work which our Business Development Team does to ensure that we gain more apprentices and, importantly, that our employers are happy with what we do. Externally, the team that day were exhibiting at Government Property 2020 with our Director of Enterprise Business Development, Meryl Bonser, presenting on how UCEM can cater for apprentices and students from GCSE to FRICS in producing more qualified surveyors into the industry.

Wednesday’s focus was on the apprentices themselves. Our Level 3 Surveying Technician, Ottilie Robinson-Shaw, wrote a fascinating summary of her life which takes in work, studying and, of course(!), fitting in time to be a World Champion in kayaking and rubbing shoulders with the world’s best sportsmen and women at last year’s BBC Sports Personality of the Year awards. Among the facts we highlighted were that we have 1,047 apprentices [this figure is now higher] currently studying with us with an average age of 24.8.

The focus on our apprentices demonstrated their diversity. We have 149 apprentices with a declared disability, 79 of whom have a full support plan in place courtesy of our support teams. We were happy to report that, despite the sector being rather male-heavy, 55% more female apprentices began studying with us in autumn last year compared to 2018/19.

Just as important as our apprentices are our employers. Our employer-focused Thursday reported that 247 employers have sponsored an apprentice to study with us and that we received an 81.8% employer satisfaction rating in the most recent FE choices survey.

LSH’s Mark Winsor provided a quote about how we work effectively with the commercial property consultancy on apprenticeships and a few members of our Apprenticeship and Business Development’s teams visited Colliers to discuss the real estate firm’s desire to hire more apprentices.

Many other employers were visited throughout the week as our Apprenticeship Outcomes Officers caught up with our apprentices to find out how they are getting on with their apprenticeships. Two round-ups were posted onto our website from these visits with the first summarising trips to the Ministry of Justice, Arcadis and AspinallVerdi, and the second recording the visits to JLL, Havant Borough Council and Woburn Safari Park.

Apprenticeship Outcomes Officer, David Meilhan wrote up a Q&A he conducted with Wates’s Bayezid Ahmed. Bayezid is enrolled on our Chartered Surveyor apprenticeship on the Project Management pathway and gave a useful overview of the tasks he performs with his employer and the structure of his apprenticeship.

Finally on the employer side, we acknowledged our own role as an employer of apprentices. Having publicised the landmark of our first two employees to complete apprenticeships in October 2018, we caught up with Georgia and Nicole to see what they are doing now and captured the thoughts of our newest apprentices to join the team.

Friday’s theme was outcomes. We posted our YouTube video of Adelle Rhule-Martin discussing what graduating means to her and how the apprenticeship will help her career. We revealed that a total of 290 apprentices of ours have received their Surveying Technician Diploma. It was also the day when our new ‘Digging Deeper’ podcast went live, with the theme of the discussion invariably being apprenticeships.

I joined Stephen Bartle, our Director of Commercial and Business Development, and our apprentice, Rebecca Turner from AECOM, to appraise our apprenticeships journey so far. As a roundtable discussion, I was able to pose some questions to Rebecca and was pleased that she has benefited greatly from her apprenticeship. She also expressed delight that she had the apprenticeship route available to her without the disadvantage of being saddled with student debt afterwards.

Less positive was when Stephen and I went into detail about the frustrations we have with apprenticeships. Reflecting on our work on apprenticeships, it’s clear that the government could have made things so much easier for us as an early adopter.

Things have certainly improved since I wrote a series of open letters to ministers detailing a huge swathe of frustrations for National Apprenticeship Week 2018 but there are still barriers to apprenticeships working as well as they should.

What needs to change

The funding model sees education providers, such as UCEM, being required to absorb apprenticeship costs up front with the repayment from government being paid in arrears. In addition to this, 20% of the government funds which go to education providers is only released to the provider upon each apprentice’s successful completion of the apprenticeship. At UCEM, we have more than 1,000 apprentices which equates to over £5m being held with no guarantee that we will see that amount return. This makes providing apprenticeships difficult to sustain financially and no doubt deters potential education providers from getting involved, particularly as HE funding is not performance-based. Something needs to give.

Apprenticeship standard approval is painfully slow with some approved standards failing to stand up to scrutiny. The Construction Site Management and Construction Quantity Surveyor degree apprenticeships, which are programmes we may offer in future, took nearly five years to approve. We are still waiting for the postgraduate Chartered Surveyor degree apprenticeship to be approved and remain baffled as to how such obviously beneficial apprenticeships take so long to get the go-ahead. All the while, the IfATE congratulates itself when a standard goes live – a low bar for success considering there are approved apprenticeships with zero starts. The process desperately needs to speed up and, somewhat paradoxically, needs to be sure education providers are comfortable with the funding bands to provide them.

Non-levy paying firms (those with a pay bill of less than £3m per year) experience challenges in hiring apprentices. These firms now have to register with a digital apprenticeship service to be eligible to hire apprentices. The levy was supposed to assist smaller businesses but a drying-up of funds has seen providers, such as UCEM, turn away up to 40,000 small employers. More needs to be done to make it easier for SMEs to hire apprentices.

There have, however, been some positive signs that the agenda will change for the better. The Conservatives in their election manifesto prioritised funding of apprenticeships. Gavin Williamson, who until very recently looked after apprenticeships in government, gave his commitment to making the apprenticeships system work for apprentices, employers and education providers. Hopefully, the newly appointed apprenticeships and skills minister, Gillian Keegan, herself a former apprentice, can uphold the momentum on this commitment. Today, a parliamentary debate is being held in the House of Commons about SME apprenticeship funding.

The rhetoric suggests a bright future for apprenticeships. Now let’s see the action.