We have a large team of Apprenticeship Outcomes Officers (AOOs) at UCEM to provide one-to-one support for our apprentices. Their role ranges from pastoral support to ensuring employers and apprentices are meeting their contractual obligations and much else in-between.

As part of that support, and to coincide with National Apprenticeship Week, our AOOs and other members of our Apprenticeships Team headed out across England to meet with apprentices and employers this week.

On Monday, AOOs, Hanna Wakeford, Kay Rogan and Sarah Sumner visited  the Ministry of Justice, Arcadis and Aspinall Verd, respectively. Here’s what they got up to…

Hanna Wakeford met our apprentice Sydney Downs at the Ministry of Justice:

I travelled to the Ministry of Justice to speak to Sydney Downs – a new apprentice – so that I could build a relationship with her and discover what it was like where she worked. I also met her line manager, as this was the first time she had worked with UCEM and I wanted to build a strong bridge between her and UCEM, to encourage further participation with us.

Whilst I was there, it was interesting to see where Sydney worked and how the office is very safety-conscious but fosters a positive working atmosphere with its open-plan rooms and encouragement of diversity plastered along the walls.

The review that is normally an hour was two hours long, as it was more conversational, and this led to the discussion of women in the built environment and how far we’ve come but how far we have to go. After the review, Sydney took to me to the floor where she worked and the discussion turned to apprenticeships. Sydney said: “I think apprenticeships are great as going to university without work experience didn’t feel right to me”. Initially, she was concerned about online learning but said that our tutors make online learning easy and that the variety of resources is ‘great’.

I spent a great day at Arcadis in London meeting with several Apprentices on the UCEM Level 6 Chartered Surveyor Degree Apprenticeship programme. To mark the start of National Apprenticeship Week, the apprentices themselves had organised a networking lunch, to enable them to meet others from different disciplines within this diverse consultancy company. It was great to speak with these enthusiastic individuals face-to-face and have an informal chat outside of the structure of a progress review. We discussed their apprenticeship programme in general and their enrolment onto the RICS APC programme as they embark on their journey to chartership. 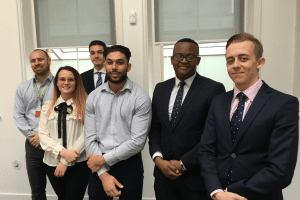 In speaking with Rob Marriott (Arcadis Professional Development Advisor), I was able to find out a lot more about the Arcadis programme which supports these individuals towards their professional membership.

My thanks to Arcadis for inviting me.

It was great meeting both Lawrence and AspinallVerdi Director, Stuart Cook, on Monday. Rather than me write about my experience, I thought I’d ask them about the apprenticeship for my update. 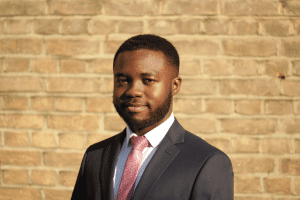 “Towards the end of my A levels, I began looking into different alternatives to university as I decided that university was not for me and I preferred a more hands-on experience. Growing up, I was always told in school that apprenticeships were for people that could not get into university, but after I was made aware of the Degree Apprenticeship, which enabled me to study for a degree whilst working and gaining experience, I decided that I was going to do an apprenticeship. After looking into different options, the built environment stood out for me because of the variety of opportunities available.

“Since I joined AspinallVerdi, I have been on a steep learning curve, especially for the first 12 months, but from day one I have received a lot of support from my senior colleagues and have been involved in different projects across the country, attending meetings and learning from co-consultants. I have also received a great deal of support from UCEM who recognise that apprentices might need extra support getting used to online learning. Over time, I have seen my confidence grow alongside my knowledge and understanding of the industry.

“I am now in the third year of my degree and have just started the APC process, and I believe that with the breadth of knowledge received from the workplace and UCEM, I will be in a very good position to pass my APC and become professionally qualified with RICS.” 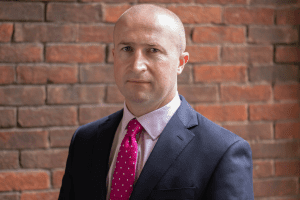 “Lawrence Owho was AspinallVerdi’s first apprentices in the firm. Like many firms, we were finding it difficult to recruit good quality junior members of staff so we decided to take a longer term view and invest in an apprentice. As a small firm we were probably a little naïve in terms of the lack of understanding school leavers have about the world but this became soon apparent when Lawrence did not know how to make a cup of coffee or tea – we addressed this followed by an induction to the pub to ensure we gave him a work/university life balance.

“In the first 12 months, both ourselves and Lawrence were on a steep learning curve. My approach was to give Lawrence as much project exposure as possible. I took him to client meetings, introduced him to co-consultants and gave him the responsibility to undertake market research and write small sections of reports. Lawrence will admit in the first year that probably a lot of the information he received ‘went over his head as he got to grips with work and studying part-time.

“In the second 12 months I saw a greater focus and engagement from Lawrence. He took on greater responsibilities in projects and I started to receive positive feedback from co-consultants on how confident Lawrence had become since he first started. Towards the end of the second year, Lawrence undertook presentations at stakeholder events for Whole Plan Viability Studies and Employment Land Reviews demonstrating his market knowledge and understanding to developers and agents.

“Lawrence is just about to start his APC process and, given the level of experience he had gained over the last 30 months, I have no doubt by the time he attends his interview he will be in the best position possible to pass.”

Katie works for UK Facades Limited as an Assistant Quantity Surveyor. She’s an experienced apprentice and likes her job.

UK Facades Limited has been brought in to the Kew Bridge development to work on the timber frames for the apartments. It’s a small part of a much wider operation on behalf of the client, EcoWorld. There are 30 different companies working on site.

It was interesting to go out and see them on site and see what they do. Separate to the EcoWorld development is the new Brentford FC stadium which is being built next door so I got to see that too.

For us AOOs, it’s interesting to see what a quantity surveyor does on site. We went into the site office and met with the project manager. I was shown around the buildings. I was shown what Katie does and it’s a very intricate development process. It was eye-opening seeing how much responsibility our apprentices have and understand the role a bit better. 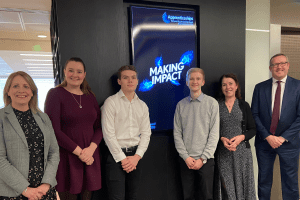 Primarily, the meeting was for Paul and Karen to meet with an apprentice, a senior surveyor and the person who looks after appointing grads and apprentices.

Colliers are looking to expand the number of apprentices that they employ across the country. They are particularly interested in increasing diversity in the workplace and are actively engaged in schools outreach to introduce a wider range of school children to a career as a Chartered Surveyor.

Colliers’ Emerging Talent Programme Manager, Kara Dawson, told us that the reasons they send all their apprentices to UCEM are that UCEM has always been ahead of the curve with apprentices, our apprenticeships are flexible and all our apprentices, no matter where they live, study exactly the same programme.

Alex chose an apprenticeship over a place at university to read Real Estate as he didn’t want the debt that students accrue and he thought it better to study whilst earning a salary. 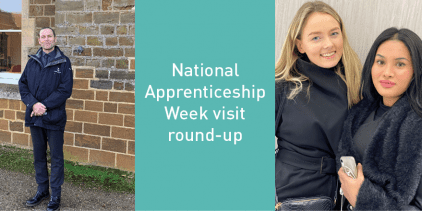 Many of our Apprenticeship Outcomes Officers (AOOs) went to visit apprentices and their employers to mark National Apprenticeship Week last week.   We published a summary of the visits and AOO, David Meilhan’s interview with our Chartered Surveyor apprentice, Bayezid… 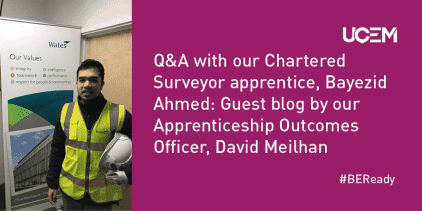 As part of National Apprenticeship week, I went out to meet Bayezid Ahmed, one of our Chartered Surveyor apprentices on the Project Management pathway. I met Bayezid on site at his latest project in Farringdon, London.    After being given… 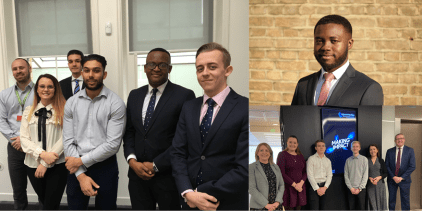 We have a large team of Apprenticeship Outcomes Officers (AOOs) at UCEM to provide one-to-one support for our apprentices. Their role ranges from pastoral support to ensuring employers and apprentices are meeting their contractual obligations and much else in-between. As…