We are now into the third month of our centenary year with plenty more events to look forward to and heritage stories to share with you.

For the March centenary blog, we move onto the second of our three centenary themes – inspiring women in the Built Environment. There will be four such blogs on this theme throughout the year but what better place to start than with perhaps the most famous out of the quartet – Irene Barclay.

Irene was a pioneer for the profession and we are delighted to have played a part in her decorated career, and life. 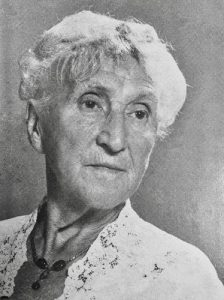 In 1922, Irene Barclay (née Martin) sat her final exams with the College of Estate Management and became the UK’s first female Chartered Surveyor. She was followed a year later by Evelyn Perry, and the pair established a professional partnership – Barclay and Perry Chartered Surveyors – which lasted for 50 years. Their female-led firm was groundbreaking in a male-dominated profession.

With an academic background in history and social work, and a strong sense of social duty, Irene used her professional qualification to bring a sense of compassion to the provision of social housing. She helped to establish several housing associations, contributed to the building of nearly 1,000 homes, and most famously, helped to improve living conditions in the slums of St Pancras. Barclay, who has been described as ‘Irene, the patron of the poor’, wrote a book called People need Roots that documented the enormous changes in social housing, and was awarded an OBE for her significant and valuable work as a social reformer.

As early as 1923, the press was writing about a ‘Feminine invasion of the profession’, but this was an over-exaggeration: women did not enter the industry in significant numbers until after the Second World War.

We are extremely proud of our first alumna. RICS published a short biography about Irene for its 150th anniversary celebrations and we couldn’t think of anyone better to be featured in our centenary blog on International Women’s Day.

Here’s to Irene, the patron of the poor!

Next month, we return to our iconic buildings theme and venture outside of the UK to examine a highly complex project which our MSc Quantity Surveying Programme Leader, Malcolm Kirkpatrick was involved in.

For more stories from our first 100 years, visit www.ucem.ac.uk/100-years-of-ucem/