Our fourth monthly centenary blog sees us return to the theme of iconic structures; namely, The National Museum of Qatar (known as Desert Rose) in Doha.

The museum – inspired by a desert rose – finally opened last week, 12 years after work began on the fiendishly difficult construction.

Our MSc Quantity Surveying Programme Leader, Malcolm Kirkpatrick was an Associate for mechanical and electrical cost management and procurement on the project between 2007 and 2009.

Here, Malcolm reflects on his work on the structure which he calls ‘the most complex project in the world’…

It was 2007 and MDA Consulting Ltd. commenced the pre-contract cost management and procurement for the ‘Desert Rose’ museum in Doha. 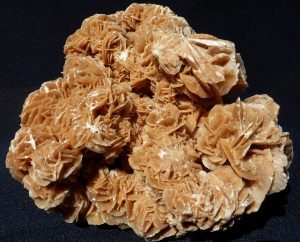 The museum, which officials say celebrates Qatar’s Bedouin past and energy-rich present, also reflects the country’s massive wealth and ambition.

As well as being an architectural and cultural statement, the new museum is also a political one by the Qataris.

It is among a growing list of spectacular buildings in Qatar, including the recently opened national library and Museum of Islamic Art.

The national museum is also the latest in the cultural ‘arms race’ and soft power course among Gulf nations, which includes Jean Nouvel’s Louvre Museum in Abu Dhabi opened to huge fanfare in 2017, which was designed to show off the progressive aspects of the various competing emirate states.

More than a decade in the making, three years late and at an estimated cost of US$434m, Qatar’s vast national museum, built in the shape of a desert rose, opened last week. 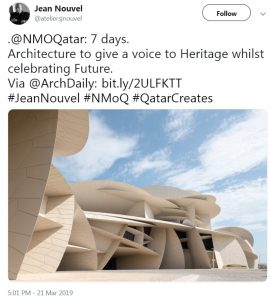 ‘Architecture to give a voice to heritage whilst celebrating (the) future’, tweeted the museum’s renowned French architect, Jean Nouvel (@ateliersjnouvel), who is also responsible for the Louvre Abu Dhabi.

The museum is prominently located on a 1.5m square foot site that includes a lake and public amenities. The main building encompasses 430,000 square feet of exhibition space while preserving the existing palace at the south end of Doha’s Corniche.

There are hundreds of interlocking disks that represent the desert rose concept in the walls, ceilings, roofs, and floors; all varied in curvature and diameter. 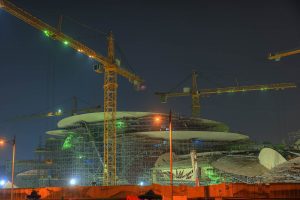 From conceptual design through design development, Rhino was used as a main design tool, and then AutoCAD was tried as a documentation tool. The design was so intricate it was difficult to obtain an accurate view on how all the different disks would be constructed as well as ensuring the information would be clearly communicated to the construction team.

“The building was so complex that it would have been impossible to do it without Gehry Technologies [BIM Model].” – Brian Wait, Partner, Ateliers Jean Nouvel

My responsibility was for the cost management and procurement for the building engineering services, weighing in at circa £40m.

Shortly after commencing the briefing stage with the Architect and Services Engineer, the design was stopped because of the complexity of the project. A new and innovative solution had to be found.

Gehry Technologies was selected and employed by the Client and Architect to manage the production of a BIM model called Digital Project using Dassault CATIA V5 BIM model software which included training the whole design team to use the CATIA V5 BIM Software tool.

The team was able to refine the design and make it buildable essentially in real time with 3D-modelling experts working alongside the designers.

As Quantity Surveyors, we were able to obtain outputs as ‘views’ from the BIM model that helped with our understanding as to how the building services were located spatially within the complex structure.

The initial budget or target cost was established and the cost plan was built up and cost checks were undertaken using the BIM software tool which also allowed MDA to measure and price design alternatives much more quickly than using conventional 3D CAD drawings. The BIM Model was also used to produce a scale model of the project for the Client.

At the time, the BIM model was a ‘federated model’ that allowed existing design software such as Rhino, AutoCAD and REVIT to be imported to create the BIM model.

With a team of three surveyors, my team and I produced a Bill of Quantities for the building services based on the POMI standard method of measurement, which was successfully used for the competitive tenders for the project.

“This is a museum that narrates the story of the people of Qatar.” Sheikha Amna bint Abdulaziz bin Jassim Al Thani (2019). 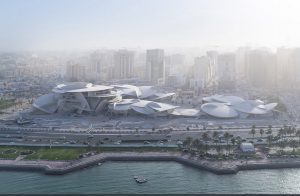 Even in a country which is being built, rebuilt and utterly transformed for the 2022 football World Cup, the national museum could be the single most eye-catching design of all Qatar’s new buildings.

The entrance includes 114 fountain sculptures in a 900m-long lagoon and the museum’s multi-curved roof, which resembles a giant jigsaw puzzle, is made up of 76,000 panels in 3,600 different shapes and sizes.

Among the exhibits is a 19th century carpet embroidered with 1.5 million Gulf pearls and the oldest Quran yet discovered in Qatar, dating back to the 1800s.

There was great difficulty in describing how the interconnecting disks should fit together. It is, after all, the most complex project in the world.

It’s one of the first buildings you see when you land in Doha – a landmark project funded by the Qatari government.

In 2009, there was a massive redesign and they stopped the project. Initially it was going to have a road going through it. It was delayed for a year.

The Desert Rose was one of my last projects in private practice. I would like to go there to see it now it’s complete.

I had an early meeting with the designers of the exhibitions and they presented their ideas to the client who said: ‘there’s nothing here to see’. Those pitching said: ‘exactly – just like the desert!’, and the client said: ‘we’re not paying you for nothing but views of the desert!’.

The designers eventually used projected views of the desert and Bedouin life on the walls and on very large TVs. The visitor space was filled with artefacts from the stone age through to modern oil-rich Qatar..

All the while the build has been going on, the technology has been advancing and they’ve had to adapt accordingly and one of the innovations they have is giving visitors an iPad when they enter and they are then able to walk around and activate stories on the iPad as you go along. The Bedouin history is oral so a great deal of research has gone into that aspect of the Qatari history.

Thank you for that fascinating insight into a devilishly complex project, Malcolm – it certainly demonstrates the possibilities which exist in the Built Environment!

For more stories from our first 100 years, visit www.ucem.ac.uk/100-years-of-ucem/