Student stories: Lee’s London to Paris cycle at the peak of his studies

Final exams and project submission looming? This would perhaps not be the best time to embark on a gruelling, four-day, 300-mile cycle ride but that was exactly what our BSc (Hons) Real Estate Management student, Lee Cooper did. Here’s his story of multi-tasking, persistence and charitable endeavour for our latest ‘Student stories’ blog… 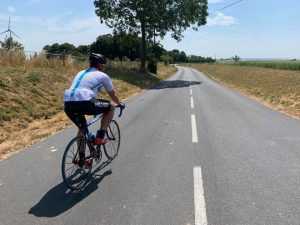 I have always enjoyed cycling as I find it is good way to unwind. I took part in the London to Paris bike ride because it was in aid of the Alzheimer’s Society and both my Nans suffered from dementia.

Dementia affects lots people and I am sure many of you know of a family member or friend that has suffered. I decided to take part in memory of Nanny Trains and Nanny Cats.

Both were founts of knowledge in my family and both were characters to say the less! It was very hard to see them suffer before they passed away. It was equally difficult seeing other members of my family suffering when supporting them.

I wanted to take on a big challenge to remember them both and a friend mentioned the London to Paris bike ride in support of the Alzheimer’s Society. I raised £1,600 which went towards a group total of £257,000 so far.

Timing of the ride probably wasn’t great being at the end of July with the final exams and project submission in August!

Around 130 cyclists took on the 300-mile ride over four days starting from Blackheath, London. The temperature hit 42 degrees and I cycled for 6-7 hours a day with some challenging routes on the way before arriving in Paris. The atmosphere as all of us reached the finish line at the Eiffel Tower was amazing. We brought Paris to a stop (unofficially) with people cheering and recording us on their phones as we went past. 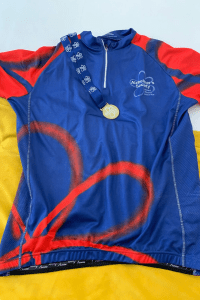 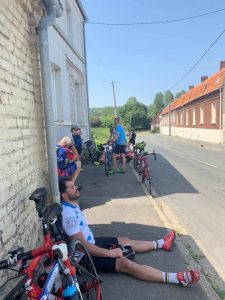 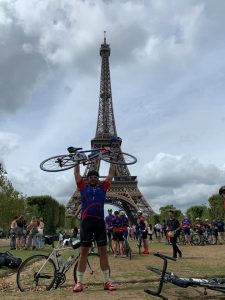 There wasn’t much downtime but I took reading material with me. Before the ride, I was completing 12/13-hour days, five days a week and spending each Saturday in the library. I was doing the accelerated, full-time study route of the BSc as well which added to the pressure to meet deadlines.

Combining studies with the ride

The last three modules of my studies were difficult full stop, particularly as I should have listened to UCEM and not taken the accelerated route while working full-time.

It was made more difficult by the ride and I had the added pressure of my department at work being bought out and a new company being formed earlier this year. It has been a stressful time going through a TUPE [Transfer of Undertakings (Protection of Employment) Regulations 2006] process and dealing with the uncertainty of what the future may hold and what the new owners’ plans are. 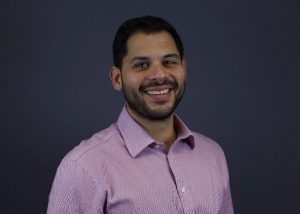 How have I found UCEM? Fun, hard, overwhelming at times and one of the best challenges I have set myself. Along with feeling nervous on every single results day, I have continually questioned whether I can complete the work.

Would I change a thing about it? ……No! All I would say to someone thinking about doing online learning is: it’s the best way to achieve your goal to fit in with life and work but it can be very lonely at times because you do not have the face-to-face interactions which usually come with learning.

I must admit though it has been strange since I have completed the BSc in August. I find myself missing the challenge and having time again!

Before studying the BSc, I took on a Foundation Degree with UCEM in Surveying Practice in April 2016. This gave my employer the confidence that I was worth investing in and I was promoted to Property Manager. There were other factors but this was a major one because it showed I was committed to the sector.

Now I have completed the BSc element, I have been promoted to Regional Property Manager for London.

My advice to those considering studying with UCEM is: do your homework before signing up! Try and speak to current students and alumni if possible to try and get an understanding what is required. I was lucky enough to have a colleague who started studying the year before I did and I was also lucky enough to meet three staff members of UCEM after being introduced by my then-manager.

Listen to UCEM. I probably should have listened more, especially when it came to choosing either the accelerated route or the standard route of study. Once you begin, plan, plan, plan! Plan your work and see what support your employer can give you.

I hope to become a Chartered Surveyor which was and is my main aim all along when deciding to study with UCEM.

In terms of physical challenges like the bike ride, I hope to do more in future. I always want something to aim for. I think the next challenge will be a Half Ironman [70.3km triathlon]!