Postcard from Paris: Reaction to the Notre-Dame fire

We were all shocked by the events at Notre-Dame last week. There has been wall-to-wall coverage of the fire at the famous cathedral in Paris which has led some people to wonder why so much attention has focused on the event; after all, thankfully, there were no fatalities.

To help put the fire into context, UCEM alumna, Sinéad Murphy (MSc Real Estate, 2014-17) – a Valuation Analyst at Knight Frank in Paris – provides some thoughts on what it means to her personally, as well as the thoughts of a colleague and friend in response to the blaze. The fire raises questions about cultural symbols, tourism and the readiness of wealthy benefactors to rally around certain causes above others – and Sinéad’s writing impressively touches upon this.

If nothing else, the fire and the coverage on it demonstrated the importance of the Built Environment around us and how buildings very rarely are just that – they are meeting places, tourist destinations, safe havens and much, much more. We enlist the thoughts of our Building Surveying Programme Leaders, Jon Hubert and James Ritson to provide their thoughts on the importance of architecture below.

But first, here are Sinéad’s reflections…

Notre-Dame was one of the first places I visited upon arriving in Paris. After growing up with the story of the Hunchback of Notre Dame, seeing it in person was even more impressive than what I had imagined. Over the course of six years living in Paris, I have visited the cathedral countless times with any visitors who came over, going all the way up to the top for the views and sometimes going to mass there with my parents. We often have picnics on the quays during the summer overlooking Notre-Dame and last month, we organised a dinner on a boat behind Notre-Dame to enjoy the view. Even today, when measuring distances from Paris in our valuation reports, we measure from Notre Dame, as it is recognised as the most central point of France’s capital city. 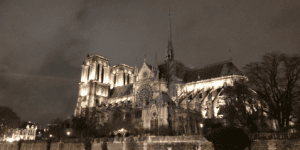 To learn that the Notre-Dame was on fire was something that I had never imagined happening. My first emotion was relief to hear that everyone had been safely evacuated. We gathered around the television to follow what was happening on the news. Coming to work the next day, the atmosphere was very subdued. 2019 has already been a difficult year for Paris with a gas explosion in January, a fire in the 16th arrondissement and the gilets jaunes movement that has been ongoing since the end of 2018.

I spoke to a colleague about his thoughts on the fire and he said as a French person, Notre-Dame is a place he feels very close to. He feels attached to the area and, as Notre-Dame is such an important piece of French patrimony, he had always believed it to be untouchable. It is a place with so much history. It was a Celtic temple before becoming a cathedral and one of the first places of construction in Paris. It is also a very important catholic site, home to the crown of thorns that Jesus was believed to have worn.

He said that he is perplexed about the origin of the fire – to him, it doesn’t seem logical that a fire started spontaneously. Learning that the fire did not start where the renovation works were taking place is even more bizarre. Oak that is 800 hundred years old does not burn easily, especially oak that was already mature at the time of construction and will have become even more fire-resistant over the following 800 years. He also feels that President Macron’s plan to rebuild the damaged areas in five years (ensuring completion for Paris’s hosting of the Olympics in 2024) is not the right thing to do – a reconstruction should take as much time as needed to carry out the necessary research and should be subject to public consultation. He feels that Notre-Dame doesn’t only belong to the French people, but people all across the world who come to see it (up to 14 million visitors per year). 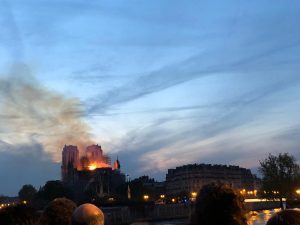 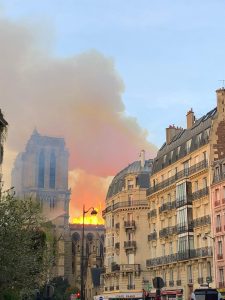 With thanks to Sinead for supplying the images.

I also spoke to a friend who described her feelings about the fire. She said: “A colleague saw Notre-Dame on fire on her way home from work and sent me a photo before it appeared in the media. When I first saw it, I didn’t understand what was happening. It was only when I turned on the news that I realised how serious it was. I am of course upset because Notre-Dame is an emblem of Paris and of France, with the story of the Hunchback of Notre-Dame. I was deeply saddened to see a part of Paris go up in flames.

“Nevertheless, what I am very surprised about is the hundreds of millions [of Euros] that were made available in such a short space of time to rebuild Notre-Dame, which evokes questions about the distribution of wealth. And that is when I said to myself that nothing is free… although it is a true emblem, there is maybe an error in the distribution of wealth in France, and this has sparked a national debate.”

‘More than a building’

We sat down with the Programme Leaders for our MSc and BSc (Hons) Building Surveying programmes, James Ritson and Jon Hubert, respectively, who discussed what the fire and the reaction to it tells us about our relationship with the Built Environment. 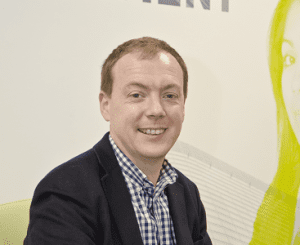 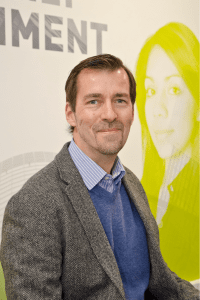 JR: It shows what building mean to people and the symbolism of buildings. Of course, people are asking: why are people pledging up to €1bn when there are more important matters to resolve?

From an architectural point of view, the British equivalent is St Paul’s. It has a protected viewpoint, Winston Churchill protected it during the Blitz. From a French point of view, theirs is a secular society so Notre-Dame has greater symbolic importance than a more religious standpoint.

While we are driving forwards with sustainability and adapting cities to the new world, buildings have meaning too. Buildings relate to memory, symbolism, heritage and cultural importance – things which have both tangible and intangible value.

To me, the most interesting image I saw, aside from those of the fire itself, were the people bringing in bags of material, like ash, which had blown away after the blaze back to the cathedral. Notre-Dame is more than a building. Architecture has that power.

Other symbolic buildings I can think of are St Paul’s in London, the Sydney Opera House and La Sagrada Familia in Barcelona. It almost represents Paris. France has gone through a huge set of changes over the course of its history yet Notre-Dame has remained as a stabilising element throughout this upheaval.

What value can architecture add to a society? It can be profound. What’s worrying is do we put that symbolism above more tangible needs?

JH: But then, you always hear that argument in construction. When money is spent on buildings, people ask why it couldn’t be used for something else.

Notre-Dame is used to measure all distances around Paris. It means a great deal to the French. They were never going to let it lie, especially five years from the Olympics. 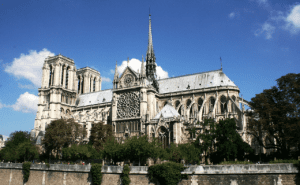 I think the equivalent over here would be something happening to Westminster Abbey or Buckingham Palace because of our Royal Family. Interestingly, a huge amount is being spent on the Houses of Parliament but there hasn’t been a huge outcry about that.

JR: There’s a quote from Spike Milligan where he said: ‘is it because with the future unknown, the present traumatic, that we find the past so secure?’* There’s a lot in that. Memory has a way of fostering a nostalgic view of things. It’s a very beautiful quote in understanding why heritage has a value to us.

Nostalgia has an impact on our wellbeing psychologically. In Singapore, there are a lot of studies relating to the rapid change which has taken place to its surroundings – people begin to lose connections to their city.

Buildings become navigation points, like the BT Tower which is used to work out where you are. Planning control is very strict in Paris though Notre-Dame is a notable exception.

JH: I’m not sure if there is the same amount of respect for St Paul’s as there is for Notre-Dame. For instance, they are never going to build a tower near Notre-Dame.

JR: A lot of people have been reminiscing about the time they have spent at Notre-Dame.

Sometime the symbolism of something can be hugely powerful. It’s hugely uniting at a time when, as Sinéad refers to, France has been through a lot.

In the UK, the Royal Family is a stable influence on society from a cultural perspective. It’s the same with Notre-Dame. Looking at what Spike Milligan was trying to convey in that quote taken from his war diaries explains why the fire was traumatic for people.

There’s something universal about buildings. When you are struck by the beauty of one, it hits you. You may not care about the proportions of it or the intricacies of its construction but everyone can relate to the buildings around us and feel something visceral, such as admiration, when confronted by them.