We too are proud to have released the news of our collaboration with the Chartered Surveyors Training Trust (CSTT) in developing and delivering Surveying Technician and Chartered Surveyor apprenticeship programmes. The news went live on Monday 16 March and you can find out more by clicking here.

It was a hugely active week in which we also shared two fantastic success stories of apprentices currently studying with us, whilst working at CBRE – the world’s largest commercial real estate services and investment firm. You can find out more on these two stories by clicking here.

AAC was the flagship Apprenticeship Conference of NAW and our very own John Pratt, Product Development Manager – Apprenticeships, was in attendance. The conference offered a mixture of keynote speeches from Government Ministers and Shadow Cabinet members, workshops from assessment bodies and Trailblazer groups, to in-depth practical sessions with Nick Linford, author of the Complete Guide to Funding Apprenticeships, and other technical specialists.

John Pratt gives us a top-level wrap up of his experience and findings at this flagship event: 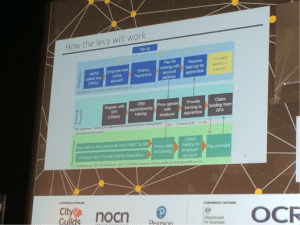 Keith confirmed that all employers in England will be able to access apprenticeship funding but added that the details of how non-levy paying employers will access funding are still being decided and will be given in the ‘Guide for Employers’ that will be issued in April.

Keith also announced that a consultation will take place over the summer to determine what the criteria will be for training providers delivering apprenticeships to be listed as a ‘registered’ or ‘approved’ training organisation.

For many of the delegates, during Day 1 of the event it was hoped that detail on the operating principles of the levy would be released; however, as the day progressed it became clear that the only limited additional detail was available and that the finer details won’t be released until April 2016.

Find out more from day 2 onwards in Part 2.