To celebrate National Apprenticeship Week, we are sending out four of our Apprenticeship Outcomes Officers (AOOs) to shadow several apprentices throughout the week.

The shadowing opportunities will provide our AOOs with a different perspective of the challenges and workplace experiences our apprentices face alongside their studies.

Here, Sarah reports back on her conversations with Tom and Naomi, providing her thoughts on how the apprenticeships are benefiting both apprentices, as well as their employer…

To make the most of this shadowing opportunity, I arrived prepared with a list of questions I thought would be interesting to ask, particularly with my AOO hat on. 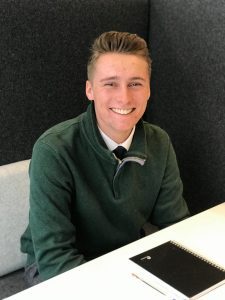 He said he had the opportunity to do work experience at school and he loved it. He got to spend a week on-site and found the work varied.

After a week’s worth of experience, he did a few extra days as a way of earning some pocket money while he decided whether full-time university was right for him.

He did some research on the internet and decided that he wanted to be a Chartered Surveyor. His career advisor was the first person to mention the role and his subsequent research confirmed that it sounded like the sort of thing he would enjoy.

He came across Faithful+Gould and for the application process, he had to write a letter. Tom then had a phone interview and was asked to meet the Director.

After the interview, he got a call to say he had been successful. He had his induction which was part of the onboarding process.

How was the welcome at Faithful+Gould?

The company was so welcoming. They are used to having apprentices and graduates, and have a high pass rate for the APC.

Tom remembers his first day at Faithful+Gould. He was a school leaver and was very nervous. He got a really early train. Once he was there, he was well looked after. The main part of the day was being given a company overview. A lot of established graduates explained the role in more detail. He had a great insight from day 1.

He has been well looked after since joining the company. Faithful+Gould run a number of social events and he has found them to be useful for getting to know people. It was helpful to go to these to get to know his colleagues and what their job roles were.

As part of his quantity surveying work experience, he shadowed an experienced surveyor on part of a residential development and he got to attend progress meetings. This inspired him to be a quantity surveyor. The fact that he saw there was a lot of variety within the job role and it’s not just a 9-5 office-based role appealed to him.

One of the main themes from our discussion was the travelling and transition between school and the workplace. I didn’t think about how the student was feeling from being in a school environment and living 15/20 minutes away to jumping into commuting and getting up early. You can have 7-7 days rather than 9-3.30 you’d be used to at school. Mentally and physically, that was draining. By 3.30pm, he was tired.

It’s a long day for someone coming from school. That was the hardest transition for him. It was also new for him to feel responsible and accountable in the job role which was another transition.

How has Tom found the studying with UCEM?

Getting used to UCEM’s online learning through the VLE [virtual learning environment] was part of the transition too. He had to understand what resources were available to him and get used to finding his way around the VLE.

He gave open and honest feedback and when asked what UCEM could have done better at the start of his studies, he said there could have been better signposts to the help of Academic Support Tutors who are there to help any of our apprentices.

Academic Support Tutors can help with creating a study plan with our apprentices to ensure they are as prepared as they can be. He is a very good student.

In terms of the positives, he said the apprenticeship workshops were helpful. They are in line with the APC and are directed to his competencies in the workplace.

For him, one of the best things about his apprenticeship is the speed of what he is learning in the workplace which correlates to the university work. He has been getting practical experience from day 1 rather than going to university and later having to do the practical side.

How is the job going and what does Tom’s line manager make of his progress?

The job encompasses project management and meeting lots of different clients. It’s really flexible. He has to plan his time effectively.

His line manager commented about how engaged he is. His professional and personal attributes have grown. There is trust to allow him to work more independently in his second year of the apprenticeship.

In terms of the support he receives at work, Faithful+Gould run lunchtime sessions where they look at APC topics – defects, for example which work well with the workshops UCEM runs.

Tom’s line manager said how he is learning the practical delivery alongside the academic theory which makes him a valuable team member. The route he has taken will hopefully make it easier for him to achieve the APC. He already has workplace evidence for it. Hopefully he will become chartered quicker. He is really engaged, motivated and is doing everything to achieve it.

What did I take from the experience?

From my perspective, Tom was professional in his approach – succinct, open, honest and welcoming. I would have been proud to have had him in my team. He is engaged and keen to learn. 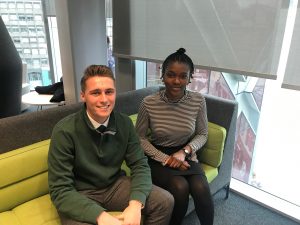 The same goes for Naomi who Tom introduced me to later in the day. She has different professional attributes. She is very calm and collected. She is doing Building Surveying and Tom is doing Quantity Surveying. They are not in the same team. It was great to meet Naomi and put a face to a name.

Naomi is just as engaged as Tom and she has always wanted to work and learn at the same time.

They are inspiring young people. I wish I had that same get-up and go when I was that age. I was impressed with both of them in terms of their professionalism.

They work in a very modern environment. It’s a beautiful environment to work in. There are lots of pods around their floor, there are breakout areas. They have also got a quiet zone area. The quiet zone prohibits mobile phones which helps with their wellbeing. They hot-desk which enables them to be flexible who they work next to and is useful when working on projects with different people to change where you sit to suit that project. 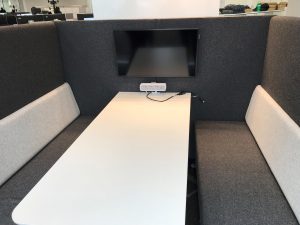 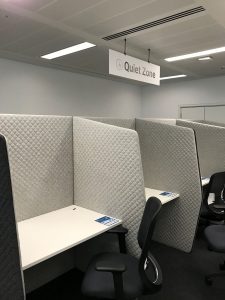 Faithful+Gould are working on a residential and commercial complex in Wembley and I have been invited to go on-site at a later date, which I intend to take up.

The shadowing has brought our progress reviews to life. We tend to ask the same questions at our 10-week reviews but meeting Tom and Naomi has brought it to life, showing the commitment required to be an apprentice at degree level.

I came away with a better understanding of making sure to check on their wellbeing and make sure they are juggling all their commitments as it is no mean feat managing all they are doing.

Thank you, Faithful+Gould for arranging this opportunity, and to Naomi, Tom and Sarah for taking part.