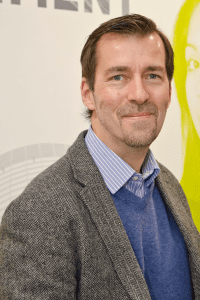 I finished school at 18 but didn’t get the grades needed to undertake the Philosophy and Economic History degree at the University of Bristol I had applied for.

The year was 1982 and the UK economy was still struggling under Margaret Thatcher so the jobs market wasn’t exactly booming.

I applied for various jobs and was successful in applying to become a Trainee Surveyor at the Open University in its Estates Division in Milton Keynes.

I worked in a drawing office dealing with minor works such as pathways and landscaping features. The job required basic skills but it chimed with my interest in the wider environment around us.

After 12 months, I returned to Bristol to work for BT and began my career in IT utilising my computer skills and later going on to train people. My career in IT saw me work in the UK and in Canada and I worked with a wide variety of people which gave me a good grounding in knowing how to work with all manner of different characters.

I worked in IT for 25 years but felt there was unfinished business in the Built Environment, harking back to my time in Milton Keynes.

Moving back into the Built Environment sector, I felt architectural technology was the best match for my skills with the dual function of being creative and finding solutions.

I enrolled at the University of West London (UWL) onto the Architectural Technology course. I was 44 at the time so I can relate to any student returning to higher education to gain the skills needed for a career change.

My Course Leader was Paul Fitchett who is now a Tutor at UCEM so it was nice to see at least one friendly face when I joined the institution!

The degree was very informative and I really enjoyed it. I graduated in 2011 which, in a oddly familiar twist of fate, was a time of recession in this country and echoed the difficult job market I entered in 1982. Once again, jobs were hard to come by but fortunately, I was offered a part-time teaching role at my alma mater.

UWL was short on staff and felt I possessed the requisite skills to do the job. I ended up doing seven hours’ teaching on my first day! I was teaching to roughly 25 people and delivered a session on health and safety in the morning and a lecture on professional development skills in the afternoon. By the end, I was hoarse and had no voice left!

I was thrown in at the deep end and I learnt a lot in that first year of teaching, from academic rigour to assignments and exams to marking and feedback. I have stayed in academia ever since and find it an always-interesting environment to work in.

Whilst at UWL, I became an Associate Fellow of the Higher Education Academy which enabled me to become a lecturer. I also gained a certificate in personal and professional development. I was then offered the chance to study for a PhD and for this, I had to do a postgraduate certificate in research where I looked at research methodologies and understanding what research is all about. While that opportunity for doctoral study didn’t work out for all sorts of reasons (life!), I used the learning experience as a valuable foundation for my second attempt at a PhD at the University of Portsmouth where the topic is based around predicting building performance in a changing climate.

I have learnt as much from the students as they have learnt from me. At the moment, I am involved in a lot of project work – marking and overseeing it – and I get a kick out of that. It’s very much a two-way relationship with the students – developing a conversation and understanding each other’s point of view.

Building Control Surveyors have a responsibility to maintain standards in the Built Environment; specifically, regulations that keep people safe from harm, for example fire and falling objects, and allow everyone to access buildings and spaces regardless of ability. As such, oversight of other professionals in the construction industry is part of the job, which means detailed knowledge of current building legislation is required, along with the ability to communicate these needs to many different parties – planners, surveyors, local authorities, conservation groups.

A UCEM degree will equip potential Building Control Surveyors with the specific skills needed to build a successful career in this field, in an accessible, flexible and cost-effective manner.

Jon is a graduate in Architectural Technology from the University of West London (UWL) and has just started a PhD programme at the University of Portsmouth on evaluating building performance. Jon has worked in academia since graduating in 2011, having previously worked in the private sector for more than 25 years. Jon also gained a postgraduate certificate in research and is passionate about doing the best for his students. For more about the BSc (Hons) Building Control programme, head to the BSc (Hons) Building Control webpage.