As part of UCEM’s growing commitment to sustainability, the institution recently hired its first Tutor with a bespoke sustainability remit. Brian Quinn is a Sustainability Tutor who is part of our Apprenticeships Team and teaches our Level 3 apprentices. 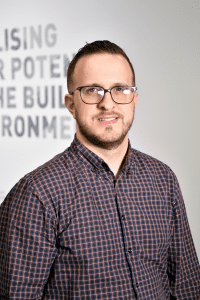 How did the workshops go?

They went well. The students seemed to be really engaged and on board with sustainability. They knew a lot about the subject already which is a good sign!

Where has your career taken you prior to joining UCEM?

Originally, I did an apprenticeship at Level 3 in plumbing and heating before going abroad for a few years. When I came back, I worked in the leisure industry for Nuffield Health where I started off as a receptionist and worked up to be a general manager. I did a Level 3 apprenticeship in leisure management whilst there.

I then went on to work as a Facilities Manager, primarily on-site at for a large American firm. I looked after four blue chip clients across six sites. My wife saw the role at UCEM on a jobs board and said: ‘you would be ideal for this’. In my previous role at the gym, indirectly, I was teaching new processes. I really enjoyed the teaching aspect of it so thought I would take the leap and apply for it!

How did you get into sustainability?

When you are trying to save money and being frugal, sustainability is a big part of that. If you are throwing things away, you are wasting money. When I was working as a Facilities Manager, the company was using plastic cutlery at its HQ. People were having three or four cups of tea a day. There was a huge amount of plastic being thrown away. I made a suggestion that they bought metal cutlery. The company’s focus was on operations as it had a turnover of £60bn a year and employees didn’t have time to look at it. Rather than buying plastic spoons regularly, metal spoons could be bought and reused, with occasional replenishment. This saved the company money and they became more interested in sustainability with more people asking what they could do.

Each employee had a bin under their desk. This was not a great way to operate waste from an FM point of view. The cleaners had to go around and clean them. It produced massive amounts of waste. We removed the waste bins and set up recycling units – 30 across the site. These contained general waste and mixed recycling bins. This contributed towards more time for cleaners, less bin bags and less waste – the full circle.

When I came here, because I had this knowledge from my personal money-saving perspective and from my work which had given me a more holistic view of it, I had a good knowledge and interest in sustainability. My daughter is three years old and since she was born, my perspective on sustainability has changed. I want her to see the same animals I’ve seen and yet, there is a high rate of extinction. My outlook now is thinking about the health of the world as we know it so it can be enjoyed by my children and grandchildren.

What kind of things do you teach your students about?

We are looking at the three pillars of sustainability – social, economic and environmental. They are the fundamentals of sustainability, looking at things like climate change. There’s a good video I use in the workshops called ‘Three Seconds’ [shared below] which is about how the planet has been here for 4.5 billion years and mankind has been here for 140,000 years which proportionally equates to three seconds in a day. The video shows all the things humankind has done such as splitting the atom and going into space but also the bad stuff such as resource use and overuse and the environmental effects of human greed. It talks about how we are amplifying the extinction rate of animals, pollution, deforestation.

This is already affecting the southern hemisphere where many countries can’t afford to deal with the impact of climate change. There’s injustice and inequality in that. It is not fair for the people who have not contributed to it. There are smaller resources such as ‘5 tips for being more sustainable at home’. We look at the benefits of replacing one meal a week with a vegetarian option. It’s looking at the knock-on effects of everything we do such as driving into work. The planet is amazing but we are speeding up its extinction.

What do you think needs to be done, both in the Built Environment and in general?

My wife works for David Wilson Homes and they have invested in timber frames from Scotland to make timber frame homes. In some ways, that’s going back to the old ways of building. Concrete and steel – the two most used materials in building – have the highest carbon output out of any process method. There needs to be more thought around the materials being used.

I don’t necessarily think that everyone should start cutting down trees as we need trees and I don’t claim to know the solution but I do believe there is a great amount of merit in everybody doing things to help the situation. It’s down to everybody as individuals to look at what they are doing and make differences to what you are doing. It could be something as simple as taking showers instead of baths. Little things which makes things better for everybody.

The ‘Three Seconds’ video resonated with the students. When you see it, it makes the conversation about trying to change easier so the more people watch it, or listen to a podcast like ‘Sustainababble’ or see the effects on the planet in the news, the more likely they are to take action.

To find out more about our Level 3 apprenticeships, head to our Surveying Technician Advanced Apprenticeship webpage.