Our second #UCEM100 blog this month concerns the stories of Doreen Thorp – an alumna of UCEM who had a huge impact on the Built Environment after a long stint in the Women’s Land Army – and fellow alumna, Dame Alison Nimmo DBE – the first female CEO of The Crown Estate whose career has mirrored her passion for regeneration and seen her make her mark in the sector. 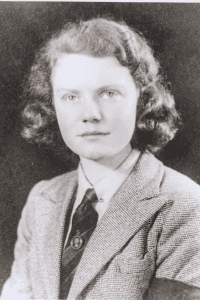 Doreen Thorp used her Women’s Land Army and College of Estate Management experience to go far. Living in Finchley, North London, working in agriculture would have been a new experience. A member of the Women’s Land Army for 7 years and 10 months, Doreen completed at least two of the College of Estate Management’s courses: Elements of Agriculture and Farm Book Keeping.

Upon her discharge from the Women’s Land Army in 1947, Doreen’s work and studies earned her a job as an Assistant Experimental Officer at the National Institute of Agricultural Engineering (NIAE). Unusually for a woman in the 1940s, Doreen worked at the prestigious NIAE for 12 years on their tractor development and testing programme, until she left to raise a family.

Doreen’s wartime work and studies created the exciting career opportunities that opened up to her. A collection of documents and photos of Doreen Thorp’s wartime work and study is held at the Museum of English Rural Life in Reading, and it captures Doreen’s enthusiasm for her studies and her work with farming equipment.

Doreen also featured in the Museum of English Rural Life’s ‘Extraordinary Women’ booklet which provides a little more information about our alumna.

For more stories from our history vault, look out for our exhibition at Reading Town Hall which opens next month! 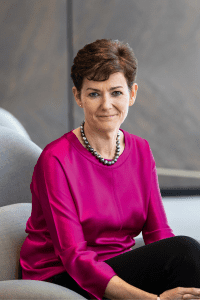 Dame Alison Nimmo DBE graduated from CEM’s Planning and Development course in 1991. Since then, she has gone on to achieve a huge amount, including regenerating Manchester after the city was bombed in 1996, working on the 2012 London Olympics and becoming the first female CEO of the Crown Estate. In addition to being made an Honorary Fellow, UCEM recognised her tremendous work in the sector by making her the 2018 recipient of the institution’s prestigious Property Award.

Here, she reflects on her journey in the Built Environment…

I’m very proud to be an alumna of UCEM. I’m part of the class of 1991 which seems an age ago! I had just started working for Drivers Jonas (DJ); my first degree was in Town Planning (Manchester). I joined DJ on the premise that I’d become a Chartered Surveyor. I remember four of us from DJ did the Planning and Development course together and three of us are still very good friends.

I fondly remember evening lectures at the University of Westminster on Regent Street. We had a 30-minute break and the four of us would sneak away next door to All Bar One for a glass of wine/pistachio nuts for dinner. Sitting in that lecture hall, I never ever imagined that 20 years later I would be responsible for Regent Street!

UCEM has played a critical role in my career. It gave me such an important opportunity, as it has for 150,000 others like me, to come into surveying through a non-traditional route; to learn whilst working… and there’s no doubt it’s a tough route.

My very clever partner is Cambridge-educated and tells me he left university knowing nothing of any use for his first job – a trainee surveyor at Gerald Eve! He later tried to do a CEM building course but didn’t make it to the end, saying it required huge motivation and persistence – two qualities he clearly lacked (back then)!

I always looked enviously at others who had career paths mapped out. I had no clear path. I just followed my passion – cities and places and regeneration. I suppose you could say that I was an opportunist, chasing down opportunities when they presented themselves – albeit, only things that looked interesting and that I cared about!

My first real career breakthrough was rebuilding Manchester after the city was bombed in 1996. I remember getting the tram through the area devastated by the bomb and needing to do something to help. I played a central role in helping Manchester turn adversity to opportunity and learnt the power of purpose – getting out of bed every morning to do something you really believe in and not stopping until it’s done.

My second big breakthrough was London 2012. I joined the bid in 2003 for a few months on a part-time basis to sort some planning issues before becoming Regeneration Director on the project. I spent eight years in all helping to deliver the best Games ever and the legacy of a whole new piece of city in the East End. Then, in January 2012, I became CEO of the Crown Estate – a really fascinating and fantastic organisation.

When I did my CEM course in 1990 there were no PCs, no internet, no Wikipedia. Our study material arrived through the post – those iconic blue, bound books thudded on the doormat! We learned to value squinting at Parry’s tables and we measured using rods!

Surveyors’ firms were partnerships, of old white upper-class men, there were no global real estate businesses and mobile phones were the size of bricks (if you could afford one!).

But it’s not just the technology and the opportunities that are changing. The culture in our industry is also changing.

At the core of UCEM is its mission: ‘to help people from diverse backgrounds enter the land, property and construction professions’. That’s been the mission for since 1919.

UCEM is rightly proud that Britain’s first female chartered surveyor qualified with the institution in 1922. She was called Irene Barclay and was an inspiring pioneer in so many ways. She practised as a surveyor for over 50 years and helped change social housing in the capital (and worked in The Crown Estate at the time!!).

Technology may change, opportunities may change, but UCEM’s inspiring mission and purpose is a constant and a real inspiration for us all.

Dame Alison Nimmo DBE will be speaking at our exclusive student and alumni centenary event in London next month. If you are a student or alumni who’s yet to register your attendance for this special event, you can do so by visiting the Projects for Good event page.