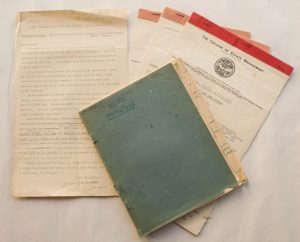 The Women’s Land Army had been established during the First World War to increase Britain’s food production, and was revived in 1939.  At its peak in 1943, 80,000 women served as ‘Land Girls’: a quarter were employed in dairy work, 6,000 worked as ‘Lumber Jills’ in the Timber Corps, and some even worked as rat catchers.  The work completed by the Women’s Land Army helped to sustain the country during, and immediately after, the war.

The Ministry of Agriculture established a scheme to educate Land Girls, many of whom had spent their whole lives living in cities.  1,275 Land Girls signed up for one of three Agricultural correspondence courses being offered by The College of Estate Management: Dairy Husbandry, Farm Book-Keeping, and Elements of Agriculture.

The Land Girls studied at the same time as working long, tough hours for the Women’s Land Army.  The postal courses enabled women to serve their country, earn money in employment, and study at a time when few women pursued education after leaving school.  After the war, many women left the workforce to raise families, but some used their experience of work alongside the knowledge they gained by studying, to embark on careers in agriculture and estate management.