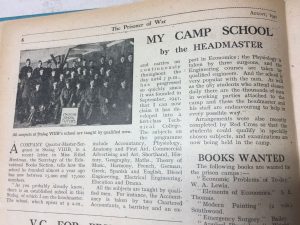 This article, titled “My Camp School”, was published in the Prisoner of War magazine in August 1942 – a magazine that was published by the Red Cross for families of POW.

In August 1942, an article was written using the words of a POW (who calls himself ‘the Headmaster’) in a letter to Miss Ethel Herdman, who ran the Educational Books section at the New Bodelian Library in Oxford, on behalf of the British Red Cross. Miss Herdman would have overseen the distribution of CEM’s correspondence courses to POWs.

The article does not name the College of Estate Management, or any of our courses, but we know from UCEM’s Student Register books from the 1940s that at least three CEM students were at this particular POW camp in 1942: Corporal B.A. Owen, Lance Corporal E.W. Nash, and Sergeant Pilot R.R. Stweart (RAF). Even though only three students were studying formally through CEM at this camp in August 1942, it is likely that many more were benefitting from the study materials.

‘The Headmaster’ describes how the school in the POW camp “developed into a first-class technical College”, and that classes were run by qualified men. The lessons were incredibly popular: “As well as the 987 students who attended classes daily there are thousands of men in working parties attached to the camp.”

The Prisoner of War magazine was sent to the families of Prisoners of War by the British Red Cross. The camp, Stalag VIIIB, was in Silesia, in the far east of Germany.