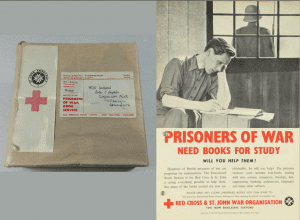 This British Red Cross replica book parcel is how CEM correspondence courses would have been sent to students in prisoner of war and internment camps. The red cross emblem is a special protective sign used during armed conflicts, and its use is restricted by law. For further information, please see the emblem page on www.redcross.org.uk or contact the British Red Cross International Law Department at contactus@redcross.org.uk.

The Channel Islands were the only British territory to be occupied by Germany during the Second World War. Upon the occupation of the Channel Islands, thousands of civilians were deported and interned in camps across Europe.