Michael tells us about his time at UCEM, directly following WW2 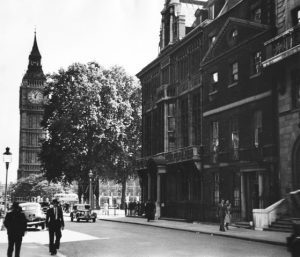 11 George Street, 1940’s with Parliament in the background. This was CEM’s interim premises after Lincoln’s Inn site was destroyed in the Blitz

“In those days 11 Great George St was a very crowded and inadequate premises. Nearly all the places for the Surveyors, Auctioneers and BSc courses were allocated to ex-servicemen and I was unable to obtain a place on the BSc courses but was fortunate to be one of about 8 of us school leavers who managed to obtain a place for the 2-year Auctioneers and Surveyors Course.  In those days the staff was very small and was supplemented by visiting Lecturers to lecture on Law and we used to attend the LSE for lectures on economics.

There were no facilities in the basement at George Street other than a common room which just accommodated a table tennis table with about 3ft either end and all meals had to be taken at a local restaurant.  There was a Lyons tea shop adjoining Westminster Station which was the most popular venue where one could get a reasonable meal for about 2 shillings or there was a restaurant near St James Park Station operated by a Mediterranean gentleman where the meal cost 2/9d.

I think that most of the students were on fairly tight budgets and particularly some of the ex-servicemen who had wives and even families to support.  The winter of 1947 was very cold and very prolonged, there was about 6″ of snow in Parliament Square for several weeks. Fuel was strictly rationed and the caretaker used to light the boiler at about 8 o’clock in the morning so there was some heat at 10 o’clock when lectures started, but his fuel ran out at mid-day and by 4 o’clock in the afternoon it was extremely cold.  The ex-service types were slightly better off than the school leavers as the Naval types had a duffel coat, the Airforce men had sheepskin flying jackets and the Army men had their British warm greatcoats.

I was in lodgings in Battersea but my Landlady did not require me home until 6 o’clock when I received an evening meal so I had at least 2 hours to kill and, as the college building was so cold, I used to adjourn to the only warm building in the whole country which was the House of Commons where I could sit in the Visitors’ Gallery in great warmth as the politicians then, as they do now, are very good at looking after themselves.  I used to pretend that I was a student in politics, taking notes on debates etc. but what I was really doing was writing up my course notes.”

Michael went on to have a successful career as a Chartered Surveyor, Town and Planning Consultant, and Rating and Compensation Surveyor.