Gerald remembers that his career at UCEM began with an important decision… hats or houses? 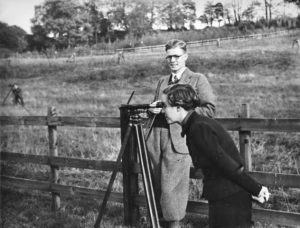 “Early in September 1930 we saw two advertisements for jobs and I went for interviews. The first was for a junior clerk in an Oxford Street firm that made hats; the second was for a similar post at the College of Estate Management at 35 Lincoln’s Inn Fields.  The hats people made no impression whatever on me and I probably made even less on them; but I was much attracted by the elegant building that housed the College.”

Gerald Burke worked for the College of Estate Management for the rest of his career, gaining some experience at other institutions at various points.

At the other end of his career, he described an experience of how he brought students to attention:

“After retirement in 1980 I lectured intermittently to CEM postal students attending refresher courses… On a visit to Hong Kong in 1983, I announced to postal students gathered in the local polytechnic that I was one of the RICS examiners who had been failing so many of them over the years and had come to see if I could be of any help in their studies.  I have never received such rapt attention as in my lecture that followed.”