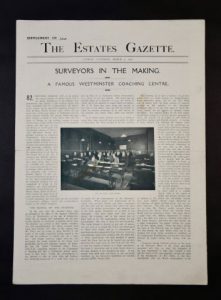 Richard Parry ran a Surveying practice in Parliament Street, London. In 1891, he decided to expand from practice into teaching, and established a tutorial school to coach students for their professional examinations. In 1896, he was joined by E.H. Blake, a lecturer in Building Construction at Reading University Extension College, as well as B.W.Adkin and Albert Parry (Richard’s brother). The coaching school. ‘Parry, Blake and Parry’ had a sense of magic attached to the name, with students viewing it as a passport to success in their examinations.

In late 1918, Britain was recovering from four years of the First World War. As society rebuilt itself, there were calls for improved building standards and living conditions, including for city slums to be replaced with better quality housing. Prime Minister David Lloyd George famously called for ‘homes fit for heroes’.

It was out of this context that in 1918, Sir William Wells – a respected leader in the profession – proposed the establishment of a College of Estate Management. In 1919, CEM was established, born out of the famous coaching school. 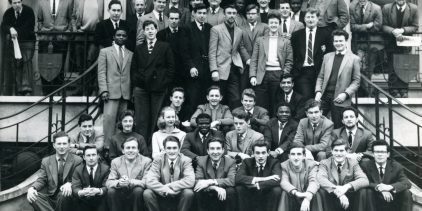